Here is a small personal project to brighten my home made from a cheap IKEA photo frame, and Arduino and a multicolor “NeoPixel” LEDs strip. The goal is simple: to realize a matrix of 12×10 big square pixels able to emit light in any color, and controllable from a smartphone. A simple demo video will explain the principle better (the LED flicker is due to the video and not normally visible): The video shows different working modes of the frame: clock, random pixels, gradual color change, sliding message. It is obviously possible to invent many other modes. Here are pictures of the frame: 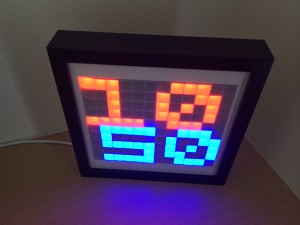 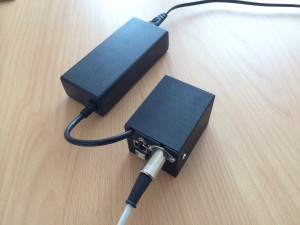 Let me list what I used to build the frame :

I also needed some tools, found at the Téléfab (FabLab of Télécom Bretagne): drill, file, screwdriver, soldering station and 3D printer. I used OpenSCAD to design the plastic parts.

To realize the display, I started by modifying the LED strip. This strip is interesting because each LED contains a small control chip, which allows to chain a large number of LEDs with only 3 wires: ground, 5V and the control signal. Only one Arduino pin is used to control the whole strip, thanks to a library provided by Adafruit. Another interest of the strip is that each LED can be cut and soldered again to build different shapes, in our case a LED matrix. The best would be to fill the frame with pixels as big as possible, but that would mean cutting each pixel and soldering it again with the right spacing. To avoid that, I decided to use the spacing between two LEDs (120 / 200 = 0.6cm) as pixel size. This way, I can put a 12×10 LED matrix in the frame, with some spacing around it. So I cut the strip into 10 bits of 12 LEDs and soldered them again in a matrix shape. The power wires are connected only on one side to shorten the path between the power supply and each LED. The control signal has to be always connected in the right direction, so it has to be connected in an S shape. Here is the result: 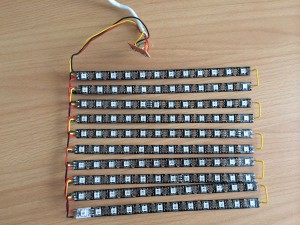 It can be useful to test sometimes that the strip is still working, using the Arduino and the example provided with the NeoPixel library.

Now the matrix is done, but pixels are not square. To change that, I printed a plastic grid using the 3D printer. All 3D parts are available on Github. As the grid is big, I first divided it into 4 parts to assemble. But an imperfect assembly left space for the light to shine between the parts. So I ended up printing the grid in one part on an Asimov 3D printer with a 20x20cm build surface at the fabriques du ponant. I printed black parts and then painted them in white. I had first tried printing them in black but the grid was overly transparent. The grid has some space to put the strip, but it may be necessary to file where the soldier is. I also attempted to cut the grid into white 1.1mm cardboard with a laser cutter (SVG file generated by the Python script with the same name). The result was very clean but the cardboard is a bit overly transparent.

To block the gird inside the frame, I designed a spacer (holder file) to print 4 times. To hide wires and empty spaces, I cut into the provided white cardboard a square of the size of the grid. To assemble, put everything inside the frame in this order:

Here is the result : 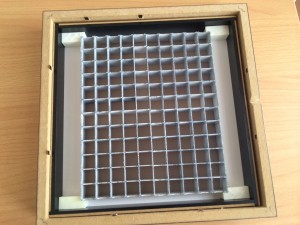 The tracing paper is used to diffuse the light, otherwise pixels would not appear square. I tried using normal paper but the light was overly attenuated. I also tried using a plastic diffusion film, but the warmth from the LEDs damaged it. To let the control cable get out, a hole has to be drilled (middle down) inside  the two sheets that close the frame. Then there is just to put the LED matrix over the grid and to close everything (first the small sheet inside the frame, and then the big sheet over it). It should hold by itself. It may be needed to add some small pieces of wood between the sheets if some space remains: 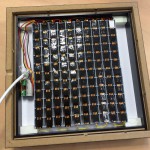 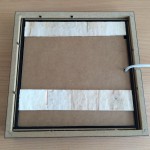 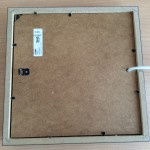 The display is over! Let’s now start the controller.

The controller is used to drive the LED strip. It includes the Arduino Uno and the Ethernet shield, and it is connected to the display through the control cable. It also icludes an RTC clock with a small battery to keep the time and save the state of the frame when it is unplugged. The battery should last more than 10 years. In addition to the clock, the circuit includes a relay that is used to cut the strip power when it is not used. This allows to reduce the power consumption (0.19A with the power cut compared to 0.5A with the LEDs set to black) and to avoid useless wear of the strip. As the relay requires an intensity higher than one Arduino pin can provide, it is controlled through a MOSFET N transistor. The diode in parallel to the relay coil avoid overloads when the relay is switched. The circuit is realized on a protoboard used as a shield over the Ethernet shield. Here is the electronic drawing: 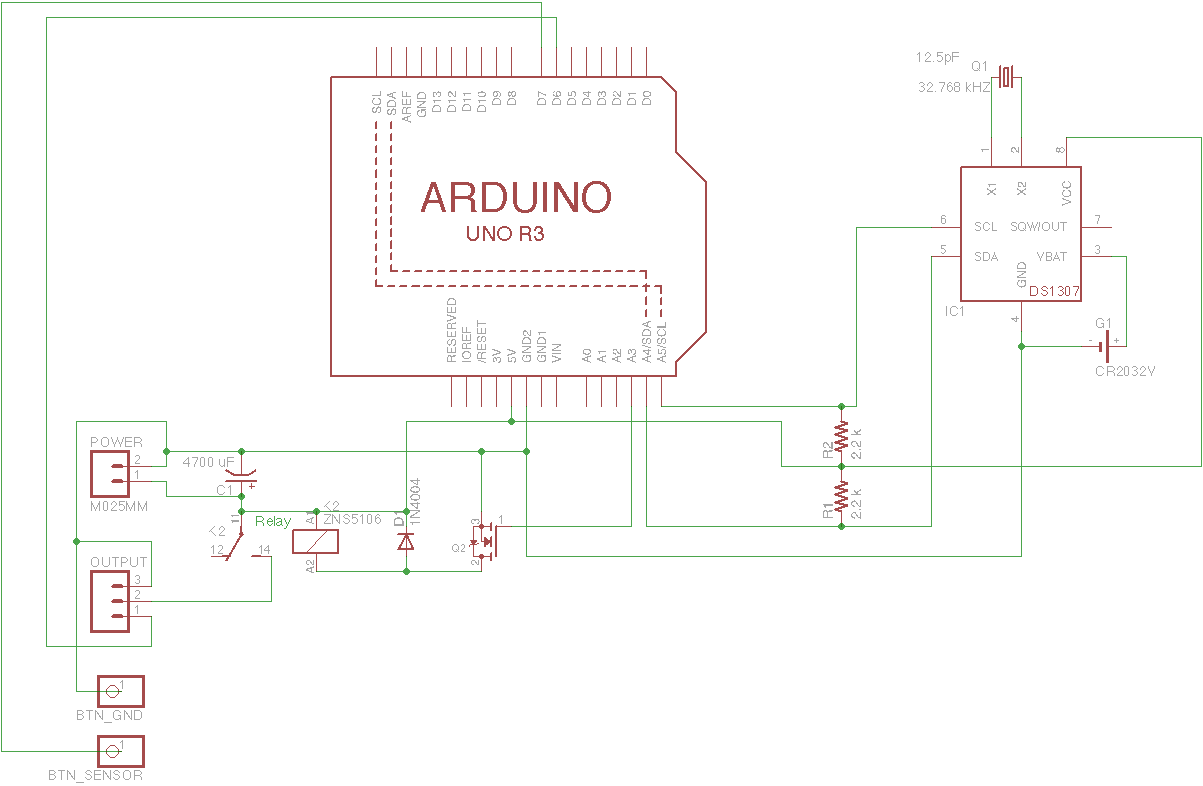 It is quite simple. A 5-pin female DIN connector is used to connect the display. Le male connector is soldiered to the control cable (make sure you use the same pins). Here is the result : 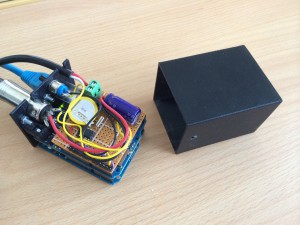 I made a small plastic box using the 3D printer to hide the circuit. The model is here for the box and here for the lid (source). Both parts are closed using a screw and a nut. Once everything is done, only the control software is missing.

The control software is divided into two parts: the code running on the Arduino, and the control interface for smartphones. I tried commenting the code properly, do not hesitate to ask questions if necessary.

The Arduino code is available on Github. It used the Adafruit NeoPixel library to control the strip and the Time and DS1307 libraries to keep track of time. The standard Wire library is also used by DS1307. Finally, the standard Ethernet library is used to implement a web server listening to requests sent by the control interface. The web server answers only on one address: http://ARDUI.NO.IP.ADDRESS/setMode?MODE_PARAMS. ARDUI.NO.IP.ADDRESS is the IP address automatically attributed to the Arduino using DHCP. To know it, one only has to push the button on the controller. The address then slides on the display. MODE_PARAMS is a string allowing the Arduino to know which mode should be displayed. To allow the interface to send requests to the frame, the header “Access-Control-Allow-Origin: *” is inserted into each reply. It allows any website to contact the frame directly. The code is divided into different classes, with a header and implementation file each:

The smartphone interface is actually built as a simple website. It is available on Github. You can see it work here. Once downloaded the first time, the interface works without Internet connection thanks to the HTML5 offline features. Everything is done on the client side in javascript. The first time, the IP address of the frame has to be entered by clicking the plus in the top right corner. Settings are saved for next uses. Requests are sent to the frame to change its mode. So the smartphone has to be able to access the frame through the IP network.

The interface is optimized for the iPhone but also works on Android.

The interface is not served by the Arduino, instead it is hosted on an external server. I tried hosting it on the Arduino, but it is way too slow.

The frame works very well in its current state, but like any project, it is never really finished. Here are some details that I would like to improve. If you have ideas, do not hesitate:

Do not hesitate to use this project, copy it, modify it, and keep me informed in the comments. I will update the article if things evolve.